This pair of foo lions, replicas of the lions found at Wright's home in Taliesin, will spark conversation among your guests. 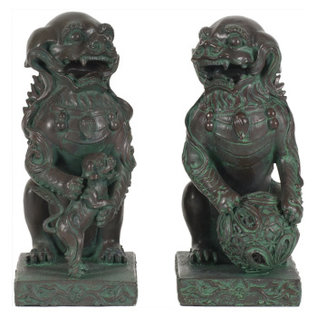 Foo Lions (also known as Fu Dogs) traditionally guarded the entry to Buddhist Temples in Japan and China. The lions are usually depicted in pairs consisting of a male resting his paw upon an embroidered ball (in imperial contexts, representing supremacy over the world) and a female restraining a playful cub (representing nurture).

This set is a replica of a pair of foo lions at Taliesin, cast in resin with a verdigris finish.

Add your review
0 stars based on 0 reviews